(This was originally posted on the excellent blog, All the Biscuits in Georgia. Please check them out.)

Many cultures have ceremonies or observances that mark significant milestones in the journey from youth to adulthood. For example, the Jewish faith has its Bar and Bat Mitzvahs, the Indigenous Australians mark the passage into adulthood with a Walkabout, and the Amish broadly observe the Rumspringa. When I was growing up, fourth graders in NC public schools had the Scrapbook.

This scrapbook was not your mother’s Creative Memories. The goal of this year-long project was for each student to learn some of the basic facts and history of their home state, such as the state bird, state flower, state motto, etc. Beginning in Autumn and ending in late Spring, each child, or more likely each child’s parent(s), was responsible for collecting and assembling as much information as possible about the state and then compiling that information into a large three-ring binder. Each entry had to be on its own page with a brief description and image of the fact. The completed work was bulky, representing months of effort or, presumably, a week of panic the before the due date.

Given the short attention span of the 10-year-old researchers, especially the males, the collected information was not exhaustive. However, for everyone, except perhaps the teachers, the scrapbooks were informative. Some of the interesting facts I can still recall about the Old North State (the official nickname and official state song) are that it is: the home of the first powered air flight (Kitty Hawk); the oldest public university in the United States (UNC Chapel Hill), and; the location of America’s first mystery (the “Lost Colony” of Roanoke) that didn’t descend into cannibalism – I’m looking at you, Jamestown, VA.

Other information was new to me, such as: the state capital of Raleigh was founded in a bar (Isaac Hunter’s Tavern); NC witnessed “Babe” Ruth’s first professional homerun (March 7, 1914 in Fayetteville); both the Vanderbilts (Biltmore) and the Rockefellers (Overhills) had very large estates in NC, and; the state is the native home to the Venus Fly Trap (Hampstead). The list goes on and on; however, one historical fact I didn’t learn until much later was that NC was home to one of only a handful of planned African America resettlements in the United States – the Tillery Resettlement Community of Halifax County. 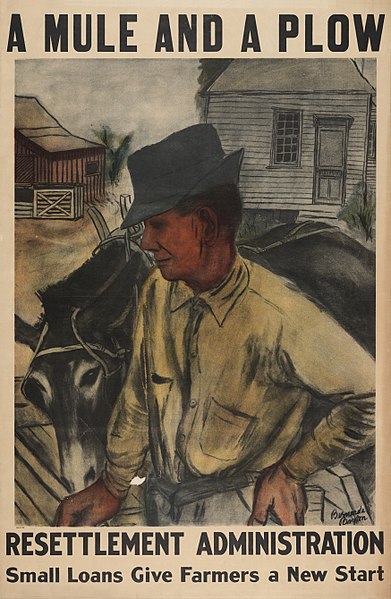 In 1935, as America was just starting to claw its way out of the Great Depression, President Franklin Delano Roosevelt oversaw the creation of the Resettlement Administration (RA) as part of the New Deal. The goal of the RA was to resettle “struggling urban and rural families to planned communities” designed by the federal government. While not all the planned communities across the country were designated for African Americas, several of them were. The Tillery Resettlement Farm was unique in that it was open to both white and African American farmers. According to the Concerned Citizens of Tillery (CCT) website, “The Tillery Resettlement Farm was one of the largest Resettlement Projects in North Carolina and one of only 15 African American Projects in the United States.”

Dispersed over nearly 18,000 acres along the Roanoke River, the Tillery Resettlement Farm was eventually home to more than 294 forty- to sixty-acre farms, each costing about $7,454 ($140,561 in today’s money). In 1936 the name was changed to Roanoke Farms. Eventually, after a large flood, the white farmers were moved away from the African American farmers to better land that was less-prone to flooding; the black farmers remained on the land that bordered the river. The tobacco allotments went with the white farmers and the black farmers were “instructed to grow cotton, soybeans, corn, and peanuts.” The white section became known as Roanoke Farms and the black section was designated Tillery Farms.

This, however, is only the start of the story. Tillery Farms attracted settlers from across North Carolina, South Carolina, Virginia, Florida and even as far away as Arkansas. The would-be farmers moved to the area, were given sub-standard housing (when compared to their white neighbors at Roanoke Farms), and faced many obstacles, both from nature and society. Yet many of those families held on and, in doing so, succeeded. The children of the settlers, besides working in the fields with their parents, filled the local school. Interestingly, that school was the Tillery Chapel Rosenwald Elementary School, “one of 46 Rosenwald Schools in Halifax County, and more than 800 in the state, built through a partnership established by Booker T. Washington and Julius Rosenwald, president of Sears, Roebuck and Company, to improve rural education in black communities.” Many of those children went on to graduate from high school and over half graduated from college.

However, Tillery was not a success due to the government intervention or simply because of the opportunities it gave black families. It was a success because of the people who settled there – many of whose descendants still live on the land today.

Driving to Tillery, as it is now known, is an opportunity to see remnants of the vast swaths of pine forests that led to NC being known as the “Land of the Long Leaf Pine” (official state toast). While the official Tillery US Post Office (Zip Code 27887) is located near the juncture of two rural state highways, the Tillery Community History House Museum is around the corner on Community Center Road. Housed within a restored Resettlement House, the museum is open Tuesday through Friday from 10 am to 5:30 pm, other times by appointment, except when under state-wide stay-at-home orders due to a global pandemic, such as comprised the majority of 2020. Inside the museum one can trace the history of the New Deal resettlement project and the Tillery Community through an exhibit designed by a partnership of the CCT’s History Committee and the 2004-2005 Duke University Document Study Students.

The importance of the museum overshadows its size: it documents the triumph of black farmers and families in the face of racial prejudice during the Jim Crow era, the economic struggles of the Great Depression and beyond, and through the hard-fought victories of the Civil Rights movement. It is truly a hidden treasure.

North Carolina has a complicated but rich history that extends back before the formation of the United States. The 12th colony to become a state (Nov. 21, 1789), it was also the 10th state to secede from the Union (May 20, 1861). These were facts I discovered when compiling my Scrapbook back in fourth grade. While I learned that one of the earliest protests during the Civil Rights Movement occurred at a Woolworth’s lunch counter in Greensboro (Feb. 1, 1960), I had never heard of the Tillery Resettlement or its generational success until I drove past the museum one day on my way to a meeting. If it were not for my love of country roads and driving through small towns, I might never have been introduced to the historical jewel that is only 30 miles from my front porch. Thankfully I found it, and look forward to sharing the story of Tillery with my children and many others.